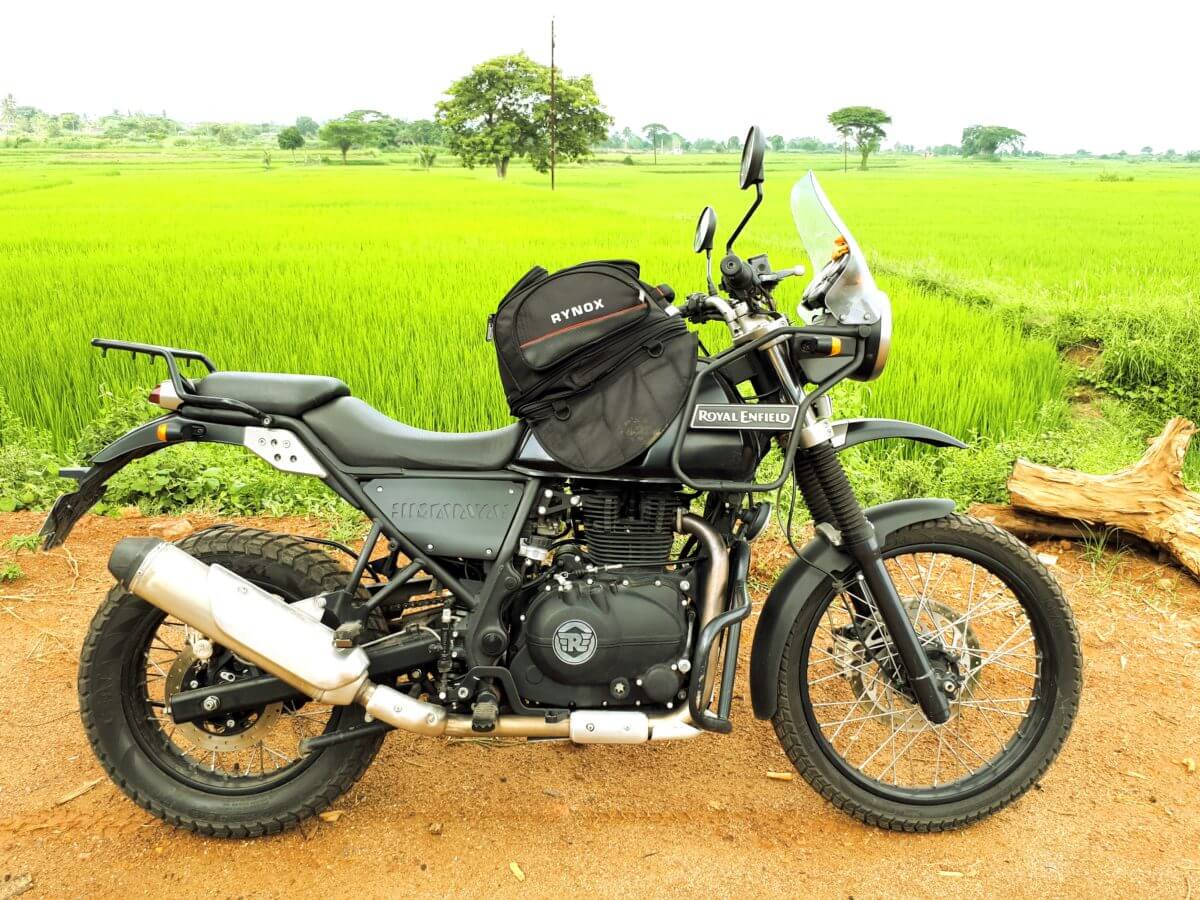 I bought my Royal Enfield Himalayan BS3 on January 26th, 2017. It is a 2017 model with quite a few tweaks made to the 2016 version. My bike is mostly used for longer rides, and once a week or two, I drive it to office.

I’ve done a couple of long rides on the bike and quite a few shorter rides. My long trips include a trip from Hyderabad to Odisha and one to Maredmulli. The shorter ones include trips to Warangal, Srisailam, Kurnool, Adilabad, Kavali, Vijayawada and Mallela Theertham waterfalls. Roads on all of these trips have been good for the most part.

This is my ownership review after covering 13,000 KM on the bike over a 19 month period. I’ll go through the good and the bad experiences that I’ve had with the bike.

I know that this is an unpopular opinion but I love the way the Himalayan looks. It’s very minimal and each part on the bike has a purpose. There is not much plastic around the bike, and hence not much to break if it were to fall down.

In fact one of the major reasons why I bought the bike was because of the way it looks. My wife and I have loved  it for that from the very beginning.

The seat on the Himalayan is wide and comfortable. Even after a long day of travel, I’m ready for another one once I’ve had a good night sleep. The seating position is upright ensuring that the there is not much strain on my shoulders or arms.

If your bum does hurt, the Himalayan makes it quite easy to drive while standing on the foot-peg so you don’t have to stop to take a quick break.

I like to cruise between 70 – 90 KM per hour depending on the road, and at this speed there are very few vibes. Once you go past 95 KM and 4800 RPM, you start feeling a slight discomfort due to the vibrations on the handlebar.

It never broke down

I know this is setting the bar pretty low, but if you search on YouTube you’ll find quite a few Himalayan having this problem. I bought the bike knowing this, and consider myself lucky to have not had this problem.

The failure rate with the 2017 versions of Himalayan seems to be much lower and the BS4 version appears to be even more reliable.

The bike handles bad roads really well. Although I generally slow down, its quite easy to glide over bad roads by simply standing on the foot-pegs, similar to what you’d on a bicycle.

It has a long travel suspension that handles highways, cities and bad roads well.  I’ve yet to bottom out the suspension, which considering that I weigh over 100 kilos is nothing to scoff at.

I’m not sure about the other Royal Enfield bikes, but the Himalayan has been getting a lot of attention from their service centers. Many service camps have been organized where bikes are tuned and checked for free. Parts have been replaced with improved ones at no cost. This might be a result of the bad publicity that the bike received during its first year due to the poor build quality and numerous breakdowns.

When I go to the service center, my complaints are noted down properly and action is taken on them. Whether its a patch or a proper fix is a separate issue altogether.

A few other things here and there,

Here are a few other minor points that I like about the bike,

I’m clubbing a lot of things together here, things that I consider to be just poor build quality.

This started for me at around 4000 KM, and continued until around 9000 KM. During this period the bike was at the service center 3 times to fix this specific issue. Each time the bike would run fine for about 200 KM before the sound started again. It was finally fixed after sending an email to the customer service and making noise on Twitter. A thorough investigation revealed that the rear swing arm mount had to be replaced. It took about 5 weeks for the replacement part to arrive at the service center.

I did my entire Odisha trip while I had this issue so this was not affecting the performance of the bike, but it was very annoying.

Screeching noise from the front and rear brakes.

This is still happening. I complain about this every time I give my bike for servicing, but a permanent solution to this is not yet in sight. After every service, it runs fine for around 500 KM and then the sound comes back.

I might have to contact the RE support again and get this fixed before my warranty ends.

This started when I did my Odisha Trip. I went over a speed bump on the national highway at a slightly high speed. After that whenever I’d hit a small pot hole, I’d hear a slight grinding sound. It would also make the bike a bit difficult to handle.

This is fixed now, but it took me three visits to the service center. Each time they’d do a patch fix of some sort and the sound would be back within a week or two. Finally after my Twitter rant, they started taking the issue seriously and fixed it along with the rear suspension noise. I’ve not had this issue since.

And a few MORE things…

Phew, that was a long list! While its true that over the last 19 months I’ve had a lot of complaints regarding the bike, I must also mention that all the major problems have been dealt with by Royal Enfield. I’m hopeful that the few that remain will be taken care off too.

Watching all the negative press that the bike was receiving, I was not sure if I could rely on it to get me through a long ride. I’m happy to say that I don’t feel that way anymore. Though there were times when I felt certain things lacking (build quality and the power at high RPM particularly), my bike has never stopped me from doing what I wanted to do.