Development of Crunchbang has now stopped. There are a few community spin-offs available, Bunsen Labs and Crunchbang++. Although most of what’s been written here should be applicable to these distributions, it hasn’t been tested. I’m now using a netinst version of Debian at home with the i3 window manager, and Bunsen Labs on my office laptop. Both are working well.

For the past year and a half, I’ve been working primarily on Microsoft’s stack – C#.NET, ASP.NET Web Forms, HTML, CSS, JavaScript (jQuery primarily). My company recently started taking up projects on open source software such as PHP, WordPress and Android. This gave me an opportunity to shift to Linux again. I’ve always been fond of Linux. The ability to customize and fine tune your system to just the way you like it gives me a sense of freedom and power.

Last Friday, I installed Crunchbang. It is a Linux distribution derived from Debian. The purpose of this post is to outline the various steps I followed to get Crunchbang ready for use. I can then refer to this post whenever I’m setting up my system again, or helping someone else set up theirs.

I’ll start of with my computer specifications first. This might help people with similar hardware configuration to find a solution to their problems.

Once Crunchbang is installed and you boot up for the first time a handy script starts up that allows you to update your system and installed software. This script can be invoked later on as well by running cb-welcome command on the terminal.

Follow the script and install Java and the LAMP stack. It is also possible to install – Git, SVN and drivers for printer.

After the script has finished, it’s time to install the graphics driver.

I followed the manual method outlined in this post on the Crunchbang forums. I tried using smxi to do it for me, but I think it was having trouble disabling the default Radeon drivers. Follow the exact steps, and reboot whenever advised.

Okay, so driver installation is over. It’s time to set up dual monitors. By default, after you’ve installed Crunchbang on a system that has dual monitors and an AMD graphics card, the monitors will duplicate each other. Once you’ve installed the driver you can change that setting. Fire up the AMD Catalyst Control Center by running amdcccle command on the terminal. 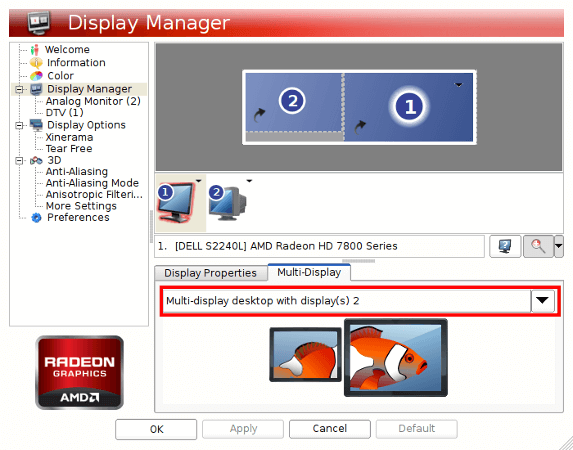 Placing monitors in the correct order (left or right of each other) is as simple as dragging them into place. You can also change the resolution from this screen.

Another problem that people with DELL S2240L and AMD cards will have that the display on the monitor won’t re-size to fit the entire screen. The fix for that is available through CCC – 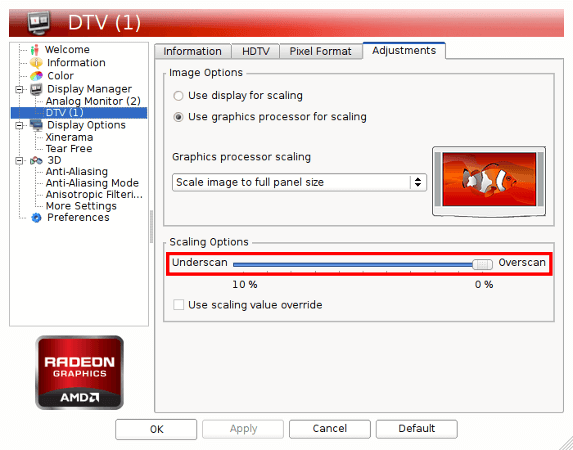 Note that the CCC makes changes to the xorg.conf file in /etc/X11. If you don’t want to make these changes everytime you reinstall Crunchbang, just backup that file.

I have a wireless Logitech keyboard. With the new motherboard the keyboard is not auto detected by Crunchbang. Installing the driver found here and then restarting resolves the issue.

If you are running new Intel hardware, the following error –

seems to pop up during boot. It’s basically harmless, but can be fixed by installing intel-microcode using APT.

Following is a list of software I install after installing #!

Then change add the following to the ~/.mplayer/config –

I know the above line, doesn’t make it sound very exciting, but you really should give flux a go.

Grab the installer from here

Grab the .deb from here

Grab the .deb installation files from here
Run the following commands one after the other –

autostart.sh determines the applications to be run at start-up and menu.xml defines the layout of the Openbox menu.

Here is my current autostart.sh file and here is my menu.xml.

Conky is basically a system monitor software for the X Window System. It can be extend via plugins and can be customized to show things such as weather.

Tint2 is a task-bar designed to be simple and lightweight. Here’s my tint2 config file.

My Conky configuration can be found here. The result –

That’s it. That’s all I do once Crunchbang has been installed. It took me about four hours hours, but with this post as a reference, next time I should be able to reduce that time to about an hour.

Crunchbang is wonderful distribution that is minimalist, fast, stable and extremely customizable. It runs very well on old and new hardware. They have a helpful and friendly community. So, if you are looking for a new Linux distribution to try out, do give Crunchbang a test drive.