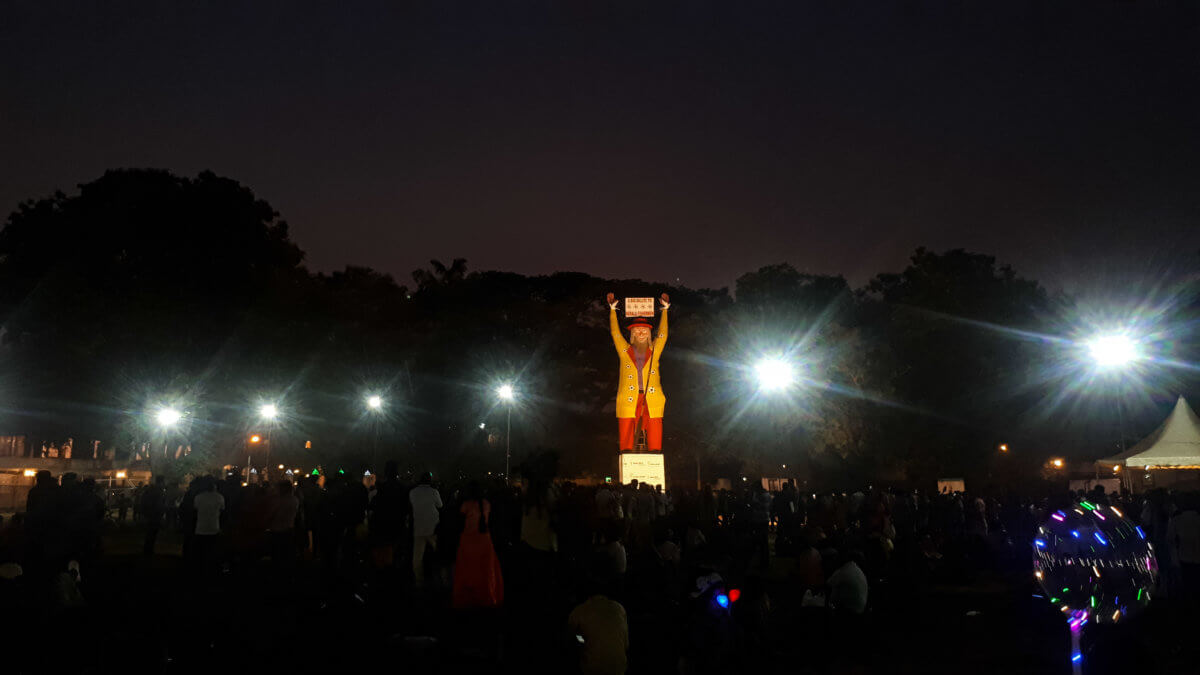 Fort Kochi has a New Year’s Eve tradition of burning Papanji at midnight. It is part of the Cochin Carnival, an event that is conducted annually for 10 days from Christmas to New Year. Having decided to attend it, we started our homestay in the afternoon. Since we had some time on hand, we visited a of other places before heading to the Parade ground to witness Papanji being burnt.

Our first stop was Paradesi Synagogue or Jewish Synagogue in Jew town. Before entering the synagogue, there is a small room with pictures depicting the history of the Jews arrival in India.

Inside the synagogue, beautiful lamps and chandeliers are hung from the roof with Chinese porcelain tiles covering the floor. There were some Hebrew inscriptions on the wall. It was quiet and peaceful. A clock tower built much later stands outside the synagogue.

We overheard a guide saying that a lot of the Jews living here have migrated to Israel and hardly any are left, which could be the reason why we didn’t see or meet any. The synagogue street is full of handicrafts shops mostly run by North Indians, with Kashmiri woolen items, woodwork metal .

There is a Spice market in the same area where different varieties of spices like Pepper, Cloves, Cardamon, Cinnamon and Nutmeg among many others are sold. After inquiring in 2 to 3 shops, we noticed the prices to be more or less the same. Some shops also sell handmade incense sticks.

An International Tourism Police Station And Police Museum is located close by which showcases the history of the Police force in Kerala and how it has transformed over the years. It also contains information on various techniques used to solve crimes such as fingerprint and knife wound analysis. In one room, there are manikins depicting knife wounds made by different types of knives and some actual pictures of such wounds from various crime scene. The pictures are quite gory, so not something you should see if you are squeamish at the sight of blood or torn up body parts. The museum is small and takes about 30 minutes to cover.

Next we stopped at the Kochi-Muziris Student’s Biennale hosted near Mattancherry palace. Out of all the items on display the following were our favorites (maybe because these were the easiest to make sense off),

We left the Biennale at around 5:30 PM. Since the Biennale shuts down by 6:00 PM, we headed to Parade ground to see Papanji. The roads around the ground are closed during the event, so we parked our bike at the Santacruz ground and walked around.

Papanji was placed in one corner of the ground. On an adjacent corner a stage was erected, where a DJ played music and anchors conducted other activities to keep the crowd engaged till midnight. This year, Papanji honored the fishermen for the lives they saved during the floods.

On our list of places to visit that evening, we also had Velli ground where a huge tree is decorated every year for Christmas and New Year. It is apparently the largest Christmas tree in India. The tree is not a conifer, but it’s the thought that counts! The tree is noticeable from quite a distance and it looked beautiful with the decoration and lights. Under the tree a DJ had people dancing to his tunes making the entire scene look like an open, free to join disco theater. Its nice to see how festivals bring families, friends and kids together to have fun. We sat in the ground looking at the tree and munching food bought from the nearby stalls.

After spending some time at the Velli ground, we decided to have dinner on our way back to the Parade ground. The roads in Fort Kochi were bustling with people dancing, cooking and selling various food items and drinks in-front of their homes. It is from one of these homes that we tried Kuluki Sharabat for the very first time.

Due to New Year’s Eve, most of the restaurants had closed early. Teapot Cafe was the only place we found open. We ordered a veg sandwich and a chocolate pancake, both of which were okay but nothing great. This was bit of a let down since we had high expectations after reading the reviews. Maybe due to the festivities things were not as good as usual.

We then went back to the Parade ground and waited till midnight. When the clock struck 12, Papanji was lit on fire among-st loud cheers from the crowd. We also noticed multiple drones in the sky recording the event. The whole thing was over in few minutes and afterwards everyone started making their way back to their homes. On our way back to the homestay the roads to the Ro-Ro ferry were a little crowded as everyone was exiting the ground at the same time

On our drive back to the homestay, we noticed a road accident near the airport. A car had collided with a truck parked on the side of a straight road. It looked like the car driver was drunk, had lost control and rammed into the stationary truck. It seemed like the occupants had already been taken to the hospital. Either way, a bad start to the new year for the occupants of the car.

We spent the next few days at the homestay. On 2nd Jan, when we went to Aluva to buy groceries there was a rally going on with people carrying saffron flags. We didn’t know what it was about until later that evening when Anil bhaiya, our caretaker at the homestay, told us about the strike.

Two women entered the Sabarimala temple in the early hours amidst protests against the Supreme Court ruling allowing women to enter the temple. These two women were the first to enter the temple following the ruling. As a result, protests were being conducted across the state by opposition political parties and a strike was declared.

To be on the safe side, we did not venture out for the next couple of days. We did go to the Suvarnodyanam biological park, close to our homestay, for a walk. This park is home to different varieties of bamboo trees and is a nice place for taking a stroll. There is a small coffee shop inside the park but the taste of the coffee there left much to be desired.

We found the wait until midnight for Papanji to be burnt a little boring. If you are someone who enjoys dancing and doesn’t mind dancing to tunes of songs that you do not understand, you might find the place less boring than we did. We can imagine the event being a lot of fun if you are with your friends or family. We also recommend that after the event is over, you wait for sometime before trying to exit the ground as there is usually a large crowd.

Looking back, we do feel that the event is worth a visit to experience the local culture.

Following are the places we visited: